Happy New Year! It's been a while since I've had time to sit down and do a blog post. 2015 was a huge year.


While working on "The Angry Birds Movie" at Sony Pictures Imageworks in Vancouver I was presented with the opportunity to be a lead. I must admit it was one of the most rewarding experiences of my professional career. It was tough and a huge learning experience, but I'm so happy I did it. The entire team was amazing, from the director to the animators on the team. The final product is going to look amazing.

Over Christmas, a super cute and adorable tv spot was released showing the hatchlings of the movie. Check out it below but beware...your head may explode into candy due to the cuteness.


After a much needed (albeit short) holiday I'm back at Sony in the new year for "Storks" a Warner Bros production being done at Imageworks also being released in 2016. I'm going back to animating on this project which I'm super excited about. Being a lead on ABM didn't leave me much time to animate myself, which I was okay with but I'm looking forward to keeping my speed back and learning more about animating on this fun project.

Check out the teaser trailer here:

Finally some good news about "The Little Prince" which I worked on out in Montreal roughly for a year through 2013-2014 before returning to Vancouver. It now has a release date for all the English territories! March 18 2016! I'm super excited for this to finally be released in English as it's been making the rounds in other countries to much success.

Here's the trailer in case you haven't seen it yet:

So 2016 is looking to be another big year, I'll hopefully be able to post more updates about these amazing upcoming movies.

Recently I was asked by good friend and fellow animator Rusty Gray to be a guest on his animation podcast series entitled 'The Rusty Animator Podcast'.

So we organised a skype date and chatted for about 2 hours on subjects including my professional history, moving and working in different countries and the challenges that have arisen over the years from working in TV, VFX, and feature film. Then Rusty's hard drive died suspiciously in some alien abduction time traveling mutant robot zombie apocalypse, or he plainly forgot to back it up somewhere. I still like to think it was the mutant robot zombies, but I digress.

So we decided to do it again, I had heaps of fun the first time and it was interesting being on the other side of the podcast experience, having had recorded a bunch while living in London. And this is what came of it!

I was humbled and super fortunate to be apart of this series he has going. Hopefully I don't ramble on too long in this one.

Here is the link to the episode : 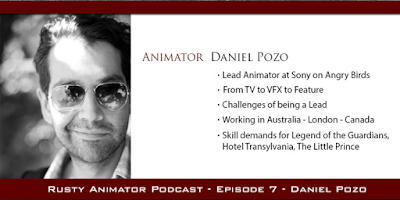 Thanks once again to Rusty for organising this and wanting me to be apart of his podcast series. Be sure to listen to Rusty's other animation podcasts with some amazingly talented people.
Posted by Unknown at 12:18 AM No comments:

Email ThisBlogThis!Share to TwitterShare to FacebookShare to Pinterest
Labels: 2015, 3d, animation, behind the scenes, podcast

Here are some character posters for "The Angry Birds" movie that I am currently working on at Sony Pictures Imageworks in Vancouver! 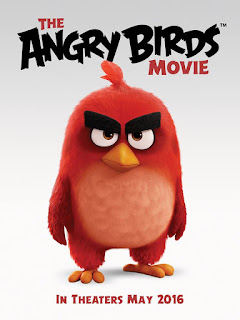 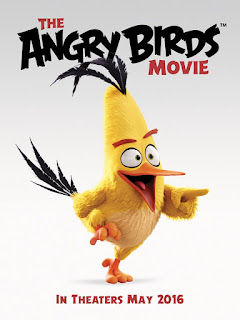 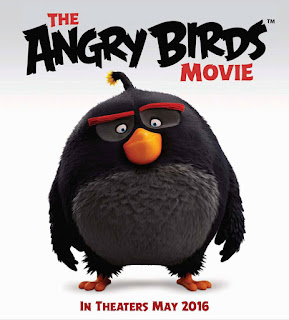 Yes they have arms and legs. It's been an amazing project and opportunity to work on this movie, hopefully people will be amazed at the quality of animation that we are producing at the moment.
Posted by Unknown at 7:58 PM No comments:

One of my all time favourite movies (for several hundred reasons) is Luc Besson's 1997 sci-fi action comedy romance futuristic everything "The Fifth Element". Upon recent re-watching, one scene stood out as a great example of a character introduction, that being of hero protagonist Korben Dallas played by Bruce Willis. Yes this is another Bruce Willis post.

So I wanted to follow up my "Last Boy Scout" post with another screen-grab-tastic post showing some stylistic choices and in my opinion a great way of introducing a character without any need of exposition dialogue (or as little as possible). And the sequence is fairly quick and by the end of it you know exactly who this character is and why you should be rooting for him the entire movie.

The previous scene ends dramatically with a superimposed skull of the film's unseen antagonist blasting at your face and cut's to Korben waking up out of what seems like a bad dream. His face quickly turns into the classic Bruce Willis dopey grin as he realises he was only dreaming.

People read the time and date backwards in 2263

Eric Serra's oddly urban percussion influenced song blasts on the cut with lights turning on in timed unison with the beat showing us who exactly this character is by choice of paraphernalia and vices.

Korben has a pet, audience members love hero's with pets. Now you do too.

I love this shot for it's simplicity and Bruce Willis' tired read of the line "Trying". In my opinion it sums up Korben's character as someone who is always in the wrong place at the wrong time (much like Bruce Willis' other notable characters) and even though there is a giant sign warning him, he just can't help but be the hero.

No food or groceries in his tiny fridge, which helps the story later on when he has to pile in a bunch of the soldiers to hide them from Cornelius and Leeloo.

The next few shots cut back and forth between the robber and Korben. Beginning with the camera looking over each others shoulders, with the robber clearly holding a sense of fleeting power as the dynamic of the scene slowly shifts towards Korben as the camera then becomes a collection of POV shots.

He clearly isn't fazed at all by the giant gun in his face.

Interestingly enough this shot shows the most amount of Korben's tiny apartment then any of the previous shots in one frame. With his medals and trophies in one corner, it is a kind of summary of all the shots that's now confirmed in the audience's mind that this is the protagonist that we will root for till the end. Who also is a bad-ass.

I love the robber's dance and acting.


With amazing music from Luc Besson's usual composer collaborator Eric Serra and great cinematography from Thierry Arbogast (also a Besson usual) this movie is re-watched atleast once or twice a year.

Ending this post once again with that dopey grin.

Posted by Unknown at 8:48 PM No comments:

Recently a Japanese poster for "The Little Prince" was released.  Check it out below!

Posted by Unknown at 8:33 PM No comments:

After being on a 90s action movie fix since the Christmas holidays, and re-watching the "Die Hard" movies, I remembered another lesser known Bruce Willis, and in my opinion, classic action 90s movie not may people have seen. That being director Tony Scott's 1991 Action Crime Comedy "The Last Boy Scout" starring Bruce Willis and Damon Wayans.

I personally like to think of this movie as "Die Hard 2.5", fitting somewhere unofficially between the 2nd and 3rd movies. And although I agree with my friend Sam's assessment that this movie is pretty much "Sin City", all they needed to do was call Bruce Willis' character 'John' instead of "Joe' and left it ambiguously at that. Maybe this was done intentionally.

It's pure early 90s action, violent and visceral, the bad guys were really bad and the good guys were flawed and broken, on the cusp of being washed up. And with amazing dialogue banter from writer/director Shane Black, known for writing fairly popular movies like "Lethal Weapon" and "Kiss Kiss Bang Bang", oh and he directed a little movie called "Iron Man 3" as well.

Classic scene, dialogue and a build up of tense interaction

What stuck out for me the most was the cinematography and lighting. Bordering on the "film noir" in parts, it's dark and moody, some scenes playing out with the actor's faces obscured in darkness or behind smoke. Great use of dutch tilt interesting camera angles and camera locations, and all the usual 'rule of thirds' fancy stuff also included. It conjures up memories of watching classic movies where whole scenes would play out with little to no lighting. An age of movie making that things weren't (usually) fixed later in post.

My favourite is this shot, Damon Wayan's character's face is completely obscured yet the frame is filled with so much stylish visual information

So this blog post is out of appreciation for Director of Photography Ward Russell's cinematography in this underrated classic action movie. Go watch it if you haven't. 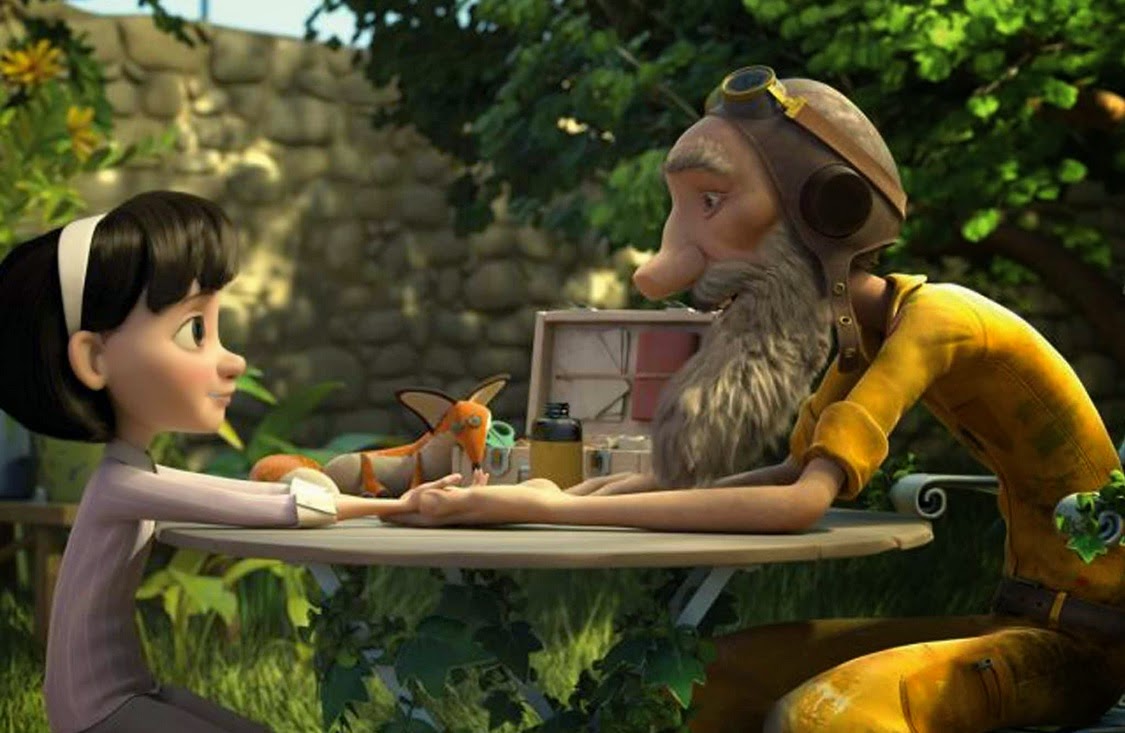 "The Independent" have released an article about Antoine de Saint-Exupéry's "The Little Prince" and subsequently the animated feature coming out in 2015.

http://www.independent.co.uk/arts-entertainment/tv/features/the-little-prince-the-new-film-of-the-boy-who-fell-to-earth-9949079.html
Posted by Unknown at 2:53 PM No comments: